The Wellington newslog collects newsitems and notices published by local organisations. The resulting content isn't going to be what you'll find in a newspaper but we think that's half the attraction.

The newslog is also available as an RSS feed.

By running an aggregator we're taking a slight liberty with other people's content. It's therefore important that we've transparent about what we're doing. Our index is available in machine readable formats for reuse by other members of the community.

The main content of each page is available as an RSS feed or JSON. Appending /rss or /json to a page url to access these feeds. This url scheme is inspired by the Guardian newspaper.

The complete set of available feeds is documented in the API instructions.

Any enquires can be directed to enquires (at) wellington.gen.nz 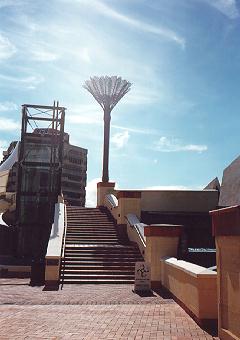 Right - One of the copper clad Nikau palm trees which dot the Civic Square and line the exterior of the Central Library building.

Valued at $25,000 NZ each, these additions to the Square were suggested by the architect Ian Athfield as a way of making the area more inviting. The Nikaus have become somewhat of an icon for Wellington City.

The Nikau, is a distinctive New Zealand native tree. Reassembling a feather duster, it grows to approximately 20ft.

The Nikau palm is found throughout New Zealand, growing as far south as Christchurch. While the trunk of this tree is of no use for building it's large leaves provided useful shelter for the early Maori, who also ate the young shots and buds. Wood Pigeons consume the berries in large quantities. The Nikau berry is extremely hard and was sometimes used as shotgun ammunition by early settlers.

Wellynews honours the robots exclusion standard. Organisations can indicate in their robots.txt that Wellynews should not index their content.

The following lines in your robots.txt file will result in your content been removed from the index:

You can also contact us directly to request exclusion.

A Java application which uses and MongoDB and Elastic search. The source code is available for review on Github.